Mombasa is a city on the coast of Kenya that sits along the coast of the Indian Ocean, which holds some the finest beaches. It is the country’s second-largest city, after the capital Nairobi. With an estimated population of about 1.2 million, Mombasa is a historic center that has contributed much to the musical and culinary heritage of the country. Inland are populous highlands famed for both their tea plantations and their variety of animal species, including lions, elephants, cheetahs and zebras. It is recognized for its scenic landscapes and vast wildlife preserves, boasting some of the most impressive scenery in the world, including vast Savannah, rugged mountain ranges and stunning national parks. Kenya is a popular destination for tourism, with Mount Kenya as one of the most popular tourist attractions.

Mount Kenya, the second tallest mountain in Africa, is an extinct volcano, often referred to as the ‘Place of Light’. Situated in central Kenya, just north of the equator, the mountain lies within Mount Kenya National Park, which encompasses 276 square miles.  The scenery surrounding this designated World Heritage Site is breath-taking.

Despite its breathtaking natural beauty, Kenya is crippled with so many challenges. Approximately 17 million people living in Kenya do not have access to clean water. The human population depends heavily on water resources, so as clean water becomes harder to find, women are forced to walk for many miles each day to find the water needed for the family.

The lack of proper sanitation is another major challenge that Kenya faces. It is estimated that over eight million people lack proper toilet facilities leading to open defecation. The severe impact of this situation on human health is diarrhea which kills over 1.5 million children worldwide each year. 88% of deaths are contributed to fecal contamination from inadequate water and sanitation.

Additionally, the lack of clean water and proper sanitation leads to a high rate of water-borne and mosquito-carried diseases, the most common and critical being malaria.  Malaria is a major cause of death and disability in Kenya. It is estimated that thousands of people die from malaria each year, mostly children under five years of age.

Agriculture plays a vital role in Kenya’s economy. Two-thirds of Kenyans depend on water, crops and livestock for their livelihoods.  However, prolonged drought has withered crops and killed livestock, leaving nearly four million people at risk of serious hunger and without jobs.

Every several months Greater Works International World Missions identifies a country to bring the love of Christ to, by partnering with the locals to conduct outreach and provide feeding to a community.

During 2nd quarter 2017, Greater Works International and Bishop Ken Wafula partnered to bring a 3-day outreach to his local village in Mombasa, Kenya.

Greater Works International agreed to sponsor an outreach which would feed upwards of 700 people.  Bishop Ken Wafula and his team worked tirelessly to purchase the food, transport it to the location and prepare the meals for the locals during the final day of the outreach. 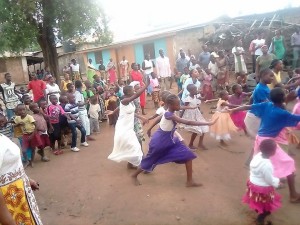 It was a festive atmosphere and there was a tremendous response during the event.  There was door-to-door sharing of the gospel, praise and worship music performed by the worship team during this incredible event. Hundreds were impacted by the praise and worship and ministry conducted by GWI Mombassa.

It was reported that 55 souls, including some atheists, non-practicing, non-affiliates, and Muslims, were saved as a result of the crusade. In addition, five people gave testimony of miraculous healings, including healing from malaria and deliverance from witchcraft. Perhaps, the most incredible testimony of all was that the heavens opened for the people of Mombasa, as they were blessed with rain for the first time in 7 years.

On the third and final day of the crusade, the outreach was culminated in the feeding of hundreds of people, consisting of men, women and children. What a joy it was to see the smiles on these precious faces, as they consumed a satisfying meal and lifted their hearts to our heavenly Father, in thanksgiving for inspiring the people in Mombasa, Kenya with a meal, which for some might be the only meal they see like this for a long time.

Because of the outreach Greater Works International World Missions continues to do research and to identify ways to improve the human condition.  These are among the many issues we plan to begin addressing as representatives of God’s Kingdom: 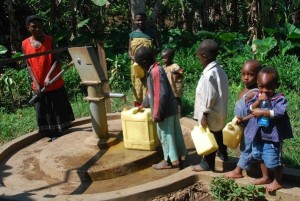 1) Lack of clean water, which attributes to water-borne diseases.  Our goal is to bring fresh water into the village by bringing a channel directly into the village.   The estimated cost is $982 USD.

2) Reduce the number of people affected by malaria.  This can be achieved by improving the sanitation and drainage systems, where mosquito larva breed.  Providing preventive medicine will also reduce the spread of malaria.

3) HIV/AIDS epidemic is rampant due to a lack of education.  We hope to publish new documents and train our local teams to heighten the awareness on the subject of HIV/AIDS.

Perhaps you are interested in assisting us in this effort by sowing a seed to reach the nations of the world. There are several ways you can help: a) Prayer is always needed to move the hand of God in these situation, but as the Bible states, faith without works is dead. Hence, prayer alone is not enough, b) We strongly urge you to consider saving and going on a trip to help meet the need in person. In this way, you can extend a helping hand and communicate the need to others as a first-hand witness, c) Lastly, if you are not yet ready to go because of other commitments, you can always become a partner by making a small monthly commitment of $10, $25, $50, $75 or even $100.
In this way, you can share in being a partaker of the great harvest of souls.

Mission
To empower believers to fulfill the mandate to take the gospel to the nations, by training, equipping and mobilizing individuals to participate in the planning, organizing and delivery of ministry campaigns– to effectively reach nations of the world with the message of Jesus Christ.